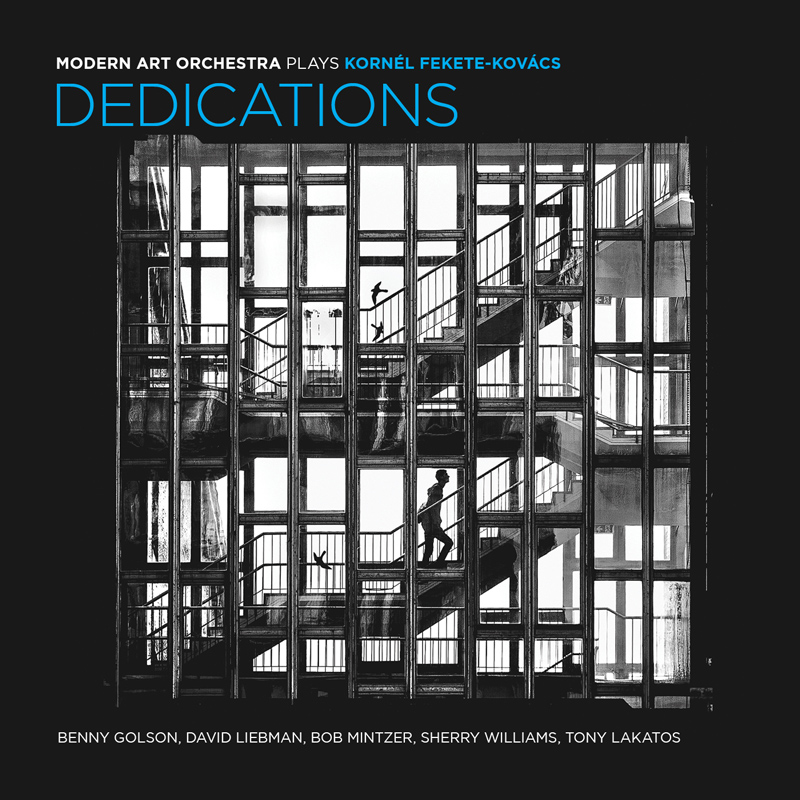 The trumpet named ‘Moon and Stars’, one of the trumpets designed by Miles Davis himself, was recently sold at an auction. The instrument was played by American trumpeter, Keyon Harrold, who, on the auction house’s video, stated that playing it was an otherworldly experience . Hungarian musicians are rarely granted similar experiences, although all young jazz musicians certainly imagine the moment when somehow, some way they make contact, in a unique space-time continuum, with the golden age of jazz. In this internal film, a monumental fanfare resounds to mark the cathartic scene when the encounter – at least, in imagination – occurs. And then, one day, a man finds himself in the garden of a remote American house. A lawnmower whirs in the distance. And without any indication, quietly and leisurely, he comes to the realization that all this is happening “here and now”, and he himself is a part of, even the shaper of the living tradition of jazz. I believe that Kornél Fekete-Kovács caught this elusive moment when on one occasion he sat in the garden of his good friend, Jim Merod, a professional jazz fan and sound engineer, among the nine small waterfalls that Jim himself constructed. In past decades, many others, the greatest in the field, had spent time there as Jim’s confidants – for example, Grammy-winning trumpeter Tom Harrell or living jazz legend Benny Golson, who dictated his life story to Jim on the very same spot. A few years later, in 2015, the ninety year old tenor saxophonist was playing the piece that Kornél Fekete-Kovács dedicated to him with the title ‘Under the Waterfalls’ in the main hall of the Liszt Ferenc Academy of Music. The song’s story comes full circle, suiting the circulating nature of water.

The ten ‘dedications’ on the album take the mainstream concept one step further: here, the respectful tribute is not one-sided but, in fact, on several occasions, recieves a response when the honorees – David Liebman, Bob Mintzer and Sherry Williams, as well as Benny Golson – authenticate the works with their solos on the album. In any case, Kornél Fekete-Kovács is not known as a composer, who as a zealous scribe, reconstructs the techniques of jazz masters with his eyes fixed on the past. Quite the contrary, in 2005 he established the Modern Art Orchestra with the intention to experiment with the broadening of the boundaries of contemporary classical music and jazz, and to serve as a workshop for musicians spreading their wings as composers. We have come to expect forward-looking music even when the MAO chooses some traditional form as its starting point. This was the case with its jazz paraphrase of Purcell’s Baroque opera The Fairy- Queen or when they approached Bartók’s Fifteen Hungarian Peasant Songs cycle through the medium of jazz, electronic, and contemporary classical sounds. Moreover, with his ambitious work titled Foundations, Kornél Fekete-Kovács translated the teachings of yoga into the language of contemporary jazz. The idea for the Dedications suite was conceived in 2005, coinciding with a demand for more conventional big band works built on a mainstream context, because this way even two orchestras would be able to play together, just because they speak the same language. Out of this necessity today, fourteen years later, a jazz suite is born with parts encompassing different stages of life, style periods, and continents.

It is staggering to think that when Bob Mintzer began improvising on the album’s opening track ’Overtured’, he did so not only as a tenor saxophonist, but as a composer whose innovations were a major contribution to the sound of twentieth-century big band music. Thus, he walks a shining carpet, rolled out for him by the MAO’s brass section, which he, as an inspiration, helped weave. What is more, Bob Mintzer has since then included the work in his own repertoire, truly channeling it into jazz tradition. When Benny Golson’s distinct tenor sound is heard whispering during the ’Under The Waterfalls’ composition, he assumes a ‘cameo role’ in the music, just as he did in the Spielberg film The Terminal from the same time. He is present as an 86-year-old musician; and at the same time, with every note, he represents himself, one of the founders of the hard bop tradition which draws into the sphere of associations all the greats he has played with – like Art Blakey and John Coltrane.And this enlarges his figure to near mythical giant status., David Liebman plays the solo soprano saxophone with age-defying freedom on Fekete-Kovács’s piece titled ’Full Moon’, which is also reminiscent of the standard ’Devil Moon’. In the track ’Mr. J. G.’, Tony Lakatos assumes the character of Johnny Griffin, with whom Kornél Fekete-Kovács has had the chance to play.

From the other side, Dedications demystifies legends, revealing their human natures, while articulating quite clearly that musicians of similar quality live among us. Not only in the composer’s flugelhorn and trumpet solos, which hold their own against the playing of the invited soloists in terms of expressivity and virtuosity. As I came to learn, ‘Mr. Hyde’ the track at the end of the album was created in honor of the drummer, András Mohai, who died under tragic circumstances in 2015. ’You bastard, that’s me!’, quotes Kornél the moment when Mohai recognized himself in the composition’s complicated metrical modulations. Now that he is truly hidden from us, Mohai’s now iconic personality beckons to us from behind the performance of László Csízi, a drummer of comparable skills. The whistling chorus at the end of the track could, for example, serve as a warning: don’t expect a huge fanfare when you meet a ‘legend’.